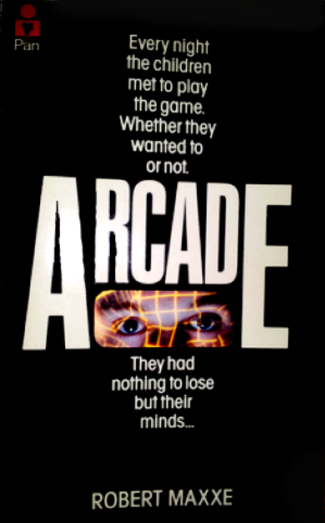 The year was 1984 when, quietly and without too much fanfare from the media, a book appeared in shops across America that caught the eye of vidiots every where.

Titled ARCADE, a novel by Robert Maxxe, the pen name of Robert Jay Rosenblum, told the story of a mysterious arcade that opens up in a Long Island resort town with only one game, Spacescape, inside it. The proprietor, a strange and illusive fellow, after setting up the game, oddly disappears until he’s found later in the story and the “secrets” that lie behind Spacescape emerge.

Highly sophisticated, with a complicated set of controls, an unusual joystick, and graphic movements far beyond the capabilities possible in 1984, Spacescape draws children one by one into its web of technological magic, eventually causing them to form into a group of “chosen ones” who ban unskilled players from playing the game. One unskilled player, following being banned from the game, turns up dead, presumably by suicide drowning… or was it the game that provoked it?

A concerned mother who notices rapid intellectual advances in her son, who just so happens to be one of the boys particularly accomplished at the game,  begins to investigate the origins of Spacescape by tracking down the arcade’s proprietor only to find out Spacescape is not a game at all but “Something evil…perhaps a government plan” to reprogram and take over children’s minds.

To those familiar with Polybius, the mind-controlling arcade game rumored to have appeared in Portland, Oregon in 1981 and driven players to the brink of madness, this is a smoking gun of a novel. In fact, the descriptions of the game play of Spacescape compared with those rumored of Polybius, on down to both games being described as being government psychotomimetic test devices, read like one in the same.  The similarities are uncanny.

However one has to ask themselves, did the earliest rumblings of Polybius’ urban legend spawn the idea for the novel, or did the novel spawn the urban legend?  Due to the fact there is no mention of Polybius until years later I’m inclined to believe the formation of the urban legend is a mixture of many things; i.e. The Berzerk Death Legend, the 1983 mass murders at Houston’s Malibu Grand Prix arcade, and ARCADE by Robert Maxxe.

Then again, we may never know.
But chasing the clues to the origins of the legend always leads to interesting things, though. In that department, I’m never disappointed. I found a really great book.

Note: Arcade by Robert Maxxe often is listed in error as being published in 1986. The correct date of initial publishing is 1984.

Writer and historical researcher with a deep interest in urban legends, unsolved mysteries and 20th century pop culture. DeSpira was featured in the 2013 documentary film, "The Video Craze: Where Were You in '82" and in the dramatic podcast series, "The Polybius Conspiracy". A classic arcade game collector, DeSpira believes every room dreams of becoming an arcade. View all posts by Cat DeSpira

Writer and historical researcher with a deep interest in urban legends, unsolved mysteries and 20th century pop culture. DeSpira was featured in the 2013 documentary film, "The Video Craze: Where Were You in '82" and in the dramatic podcast series, "The Polybius Conspiracy". A classic arcade game collector, DeSpira believes every room dreams of becoming an arcade.